From Age of Warscape Wiki
Jump to: navigation, search 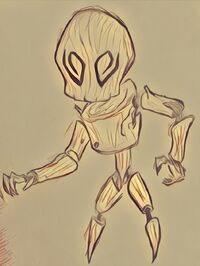 Concept art for a Livingwood Denizen

Livingwood Elemental, or just Livingwood, is a term for a material only seen in a small variety of NPCs. They originate from The Livingwood Growth, although other small tribes can be found elsewhere. Livingwood can be found and fought in multiple locations in both Gaderon and Moridahn, especially in dense forests.

The most common form of Livingwood is known as a Denizen, a small humanoid creature.

Livingwood elementals are a sentient group of creatures, seemingly entering the tribal stage of evolution. They produce villages and make weapons, trade with other elementals, and even have rivalries with other tribes. When a Livingwood elemental dies, they are absorbed by Uloff's lands and eventually grow into a tree, which will grow seeds that will fall, sprouting into new elementals (slightly similar to that of a Dryad). All Livingwood elementals can be traced back to what some of the elementals refer to as the Elder Tree, which is believed to be what remains of the first of their kind. The Elder Tree is a massive tree located at the heart of the Livingwood Growth, its size rivaling that of the Dryad captial, Esari.

The usual Livingwood Elemental stands at around 3ft, and are mostly composed of wooden parts joined by vines and plantgrowth. They are slender, with slightly large head reminiscent of skulls. There are some exceptions, such as Livingwood Guardians or Livingwood Desecrators.

They will usually have markings on their skulls, which are unique to each tribe.

Livingwood itself retains the ability to adapt very well to climate changes, as seen in certain tribes. For example, the Smoldering Tribe, who are located near a volcano, have a composition that burns eternally without any form of decay or damage.

The personality of a Livingwood elemental varies, based mainly upon their upbringings and location. Some tribes will greet strangers and attempt to make trades, while others will attack with the intent of killing.